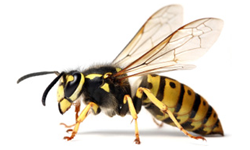 Looking for information on wasps in South Florida? You have found the right place on the web! Due to their intimidating size and appearance, wasps are typically feared by most people in South Florida. Wasps are most common around a variety of structures. Most are social insects that live in colonies, and they aggressively defend their nests by stinging. Wasps can become a problem in autumn when they may disrupt outdoor activities, but otherwise are considered nuisance insects.

Wasps, order Hymenoptera, are generally 1-2 inches long, slender, narrow-waisted with long legs and are usually reddish-orange to brown or black in color. They also appear smooth-skinned and shiny. Unlike bees, which can only sting once before dying, wasps can sting repeatedly and will often do so if they feel threatened or if they are defending their nest. However, they are not overly-aggressive and will not attack humans unless provoked. Only females have the ability to sting.

Cicada Killer wasps are large, sometimes reaching up to two inches, but rarely attack and do not provoke easily. Instead, they tend to concentrate on hunting their namesake prey, the cicada. They paralyze the cicadas by stinging them, and then drag them back to their earthen burrow for the wasp larvae to feed. Cicada Killer wasps are solitary insects that feed on nectar and sap. They prefer to build their nests by digging a hole in dry, soft soil and building a burrow in areas of sparse vegetation such as golf course sand traps, which can be problematic. In spite of their large size, the wasps usually ignore people but they can give a painful sting if bothered. Mating males are aggressive and more easily disturbed.

Female Cicada Killers feed, mate, and construct burrows for several weeks before beginning their hunt for cicadas in July and August. After capturing the cicada, the wasp carries it to the burrow, sealing one or two into each egg cell. The wasp eggs hatch and the larvae begin to feed on the paralyzed cicadas, allowing them to develop into wasps the following summer. Unlike other stinging pests, they live independently rather than in colonies and do not depend on other members of a colony to share in the raising of young or the maintaining of a nest.

The Paper wasp is known by most Floridians by the sight of their nest, which is grayish-brown and looks like an upside-down umbrella and often attached to ledges and eaves by a thin stem. Paper wasps are predators of plant-feeding pests, such as aphids and mealybugs, but will also feed on nectar and other sugary substances. Paper wasps are so named because their nests are made of paper fibers collected from dry wood and bark and mixed with the wasps’ saliva. In each paper-fiber nest there are one or more combs, or densely packed arrays of larval cells. The adults are usually found congregating on the combs, and the heads of the larvae are visible from the outside. This is the familiar open nest that may house hundreds or thousands of individuals.