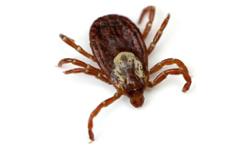 Ticks have four pairs of legs as adults and no antennae. They vary in color by species. There are two groups of ticks, sometimes called the “hard” ticks and “soft” ticks. Hard ticks, like the common dog tick, have a hard shield just behind the mouthparts. Hard ticks, when unfed, are shaped like a flat seed. Soft ticks do not have the hard shield and they are shaped like a large raisin.

Most species of ticks feed on the blood of mammals, birds, and reptiles. Ticks are not insects like fleas, but arachnids like spiders, scorpions, and mites. They have a four-stage life cycle: eggs, larvae, nymphs, and adults. Depending on its species, a tick may take less than a year or up to several years to go through its four-stage life cycle. While ticks need a blood meal at each stage after hatching, some species can survive years without feeding.

Ticks are commonly found near wooded or vegetated areas. They need an area with high humidity (to maintain moisture balance) and a mix of animal species to act as hosts.

Hard ticks seek hosts by an interesting behavior called “questing.” Questing ticks crawl up the stems of grass, or perch on the edges of leaves on the ground, with their front legs extended. Carbon dioxide, heat, and/or movement serve as stimuli for questing behavior. Subsequently, these ticks climb on to a potential host which brushes against their extended front legs.