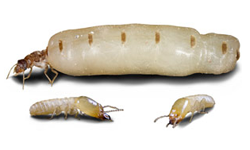 Termites are social insects. They live in colonies and feed on cellulostic plant material, such as wood. Termites belong to the insect order Isoptera and they have a strict caste system consisting of workers, soldiers, reproductives, a queen, and a king.

The two most common types of termites are drywood termites and subterranean termites. Both types feed on cellulose found in wood and wood products, but there are differences between the two species.

Drywood termites do not need ground contact or moisture. They can live their entire life cycle inside a piece of structural timber or a piece of furniture. Their numbers are less than that of subterranean termites and they tend to be a bit larger in size. Drywood termites generally swarm after sunset or at night, from May until November. However, they can swarm at other times. Their swarmers are generally pale brown in color.

Subterranean termites must have ground contact or a secondary moisture source in order to live above ground. Most are small and black in the swarmer phase. Subterranean termites generally swarm during the spring and summer months in the daytime (especially after a heavy rain). However, they can swarm at other times.

Termite swarms occur when a termite colony has grown so large that they send out new reproductive termites to start new colonies. The swarmers can come out during the day or night depending on their species. Subterranean termites generally swarm during the day and have more individuals than drywood termites which swarm generally at night.