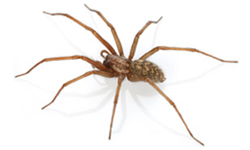 Spiders are perhaps the most feared pest. Some species are large and hairy, such as the wolf spider, while others are smaller and shiny, such as the black widow spider. Arachnophobia, the fear of spiders, affects millions of Americans and can be quite a debilitating problem.

Spiders are arachnids, not insects. Arachnids include spiders, scorpions, harvestmen, ticks, and mites. Spiders are the only arachnids that have special glands in their abdomen which produce silk. Spider bodies have two parts: the cephalothorax (combining of head and thorax) and the abdomen.

There are many different kinds of spiders. All spiders have eight legs, and most have eight eyes. Spiders do not have ears; instead they feel the sound vibrations with tiny hairs on their legs. Spiders also breathe.

Blood fills up all the empty space in a spider’s body and helps it to keep its legs stiff so it can walk. As spiders grow, they molt. That means they shed their old skin and grow a new one. They molt many times before they become adults. Many spiders live for only one year, but some like the tarantula can live much longer.