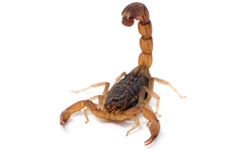 In South Florida scorpions are usually dark brown in color. Scorpions have a broad flattened body and eight legs. The front pair of claw-like pincers are used to hold their prey.

In South Florida scorpions vary in size from 1 to 4-inches in length.

Scorpions are predators that usually feed on other insects, and they are very active at night. They have a long life cycle, lasting three to five years. Males and females go through a courtship ritual prior to mating. Scorpions do not lay eggs, instead the young are born alive. After birth the young scorpions climb on the back of the mother and remain there until after their first molt. Scorpions will readily eat their own species and females will often eat their own young.

Scorpions like to hide outside under boards, debris, or other areas that provide protection. They crawl into buildings through exterior cracks in search of food or shelter. They are a nuisance especially in recently built homes. Scorpion stings can be very dangerous to anyone who is allergic.

Scorpions glow under ultraviolet lights. They are also the oldest arachnids for which fossils are known, and they were the first arachnid fossils to be found in Paleozoic strata.