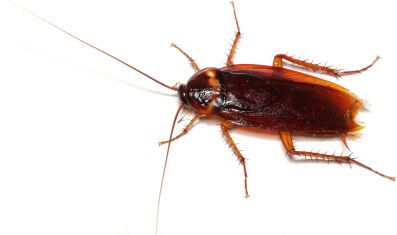 Looking for information on roaches in South Florida? You have found the right place on the web! Anyone who has lived in South Florida, even for a short time, has probably come in contact with one of the most unpopular and prominent of South Florida bugs, the cockroach.

There are about 3,500 cockroach species world-wide, about 70 of which are found in the United States. Roaches are also commonly referred to as palmetto bugs or waterbugs, but regardless of their name they can be real pests!

Roaches vary in color from a brown to black in the house-invading species, but the tropical species can be green, orange, and other colors. These nasty pests can grow up to 1.5 inches in length, and prefer warm, moist, and dark areas. They have an oval shaped and are flat-bodied, with a pronotum, or shield-like covering, which projects over their head. Both the male and female are fully winged. Although they are able to fly short distances, they seldom do, preferring to let their six long legs do the scurrying when making a run for cover, which anyone who has surprised one feeding knows.

Females produce their skittering spawn from purse-shaped egg capsules, which are formed at a rate of about one per week until 15-90 have been produced. Each capsule contains 14-16 eggs, which produce grayish-brown nymphs. These nymphs quickly begin feeding, and although their appearance and behavior is similar to the adults, they are smaller and don’t have wings. Newly molted nymphs are white, but darken to their normal color within a few hours.

Although cockroaches can be found in groups in their daytime hiding areas, known as harborages, or feeding in groups at night, cockroaches are generally not social insects as ants or wasps are. They tend to behave in an individual or non-social manner, but often form small clusters. Cockroaches aren’t picky eaters, though they tend to favor decaying matter, and have been known to snack on sweet, starchy and greasy foods. As scavengers, the cockroach is an opportunistic and omnivorous feeder. They have been known to eat just about anything: paper, boots, pet food, book bindings, cloth, leather, glue, and even other roaches.

Most Floridians are familiar with the American roach, which is the largest pest species of cockroach. They are reddish-brown with light brown markings around and behind its head, as well as two dark spots on the pronotum that look like eyes. Other cockroach species, such as the Florida Woods roach, Smoky Brown roach, Brown Banded roach, Australian roach, German roach and Asian roaches are common in South Florida as well.