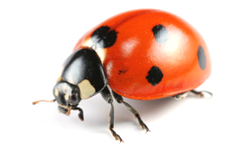 Many bugs that normally live outdoors will occasionally come indoors for shelter. This is especially common as fall and winter approach. These insects are often referred to as “occasional invaders.”

Occasional invaders can be real pests. They do not want to live in our homes, but once they wander inside they will become a nuisance. These pests may be found inside, but do not complete their entire life cycle in the structure.

Occasional invaders have certain times of the year where they are more prevalent. For instance, earwigs, silverfish, sowbugs, pillbugs, and millipedes are most commonly found in the middle of summer when the temperatures are the warmest and rainfall and humidity is high. These critters can be found entering your home and lying in dark, damp places.

Other concerns are with stored product pests such as weevils. Bugs infesting stored foods are some of the most common household pests. Insects that invade stored dried foods are often referred to as “stored product pests” or “pantry pests.” They are usually a type of beetle or moth, and they contaminate more food than they consume.

Nearly all dried food products are susceptible to insect infestation, including cereal products, nuts, seeds such as dried beans and popcorn, dried fruits, chocolate, powdered milk, cured meats, and spices. Other items that may be infested include birdseed and dry pet food.

A stored food product may become infested at the processing plant or warehouse, in transit, at the grocery store, or while in your home. Most of the stored food insects also are pests of stored grain or other commodities and may be relatively abundant outdoors. Food products that are left undisturbed on the shelves for long periods are particularly susceptible to infestation. However, foods of any age can become infested.

Stored food insects are capable of penetrating unopened paper, thin cardboard, plastic, foil, and cellophane-wrapped packages. They may chew their way into packages or crawl in through folds and seams. Insects within an infested package begin multiplying and can spread to other stored foods.

Another common insect that most Floridians are familiar with is the Love bug. Its reputation as a public nuisance is due not to its bite or sting (as it is not capable of either), but to its slightly acidic body chemistry. Because airborne love bugs can exist in enormous numbers near highways, they often die on automobile windshields, hoods, and radiator grills when the vehicles travel at high speeds.

Another pest Floridians commonly encounter are mosquitoes. This pest has caused countless problems for man throughout history. The mosquito feeds on human blood in order to provide nutrients to make eggs. It can leave behind serious health threats such as viruses and other disease-causing pathogens.