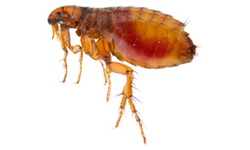 Fleas are reddish-brown in color. They are wingless, blood-sucking insects. Their bodies are laterally compressed (flattened side to side) permitting easy movement through the hairs on the host’s body. Their legs are long and well adapted for jumping. The flea body is hard, polished, and covered with many hairs and short spines directed backward. The mouthparts of an adult flea are adapted for sucking blood from a host.

Fleas are small at only about 1/6-inch long.

Fleas are parasites that feed on the blood of their hosts, which are normally humans or pets. They have powerful legs that enable them to jump approximately 7 inches vertically and 14 inches horizontally. The female flea lays tiny, white eggs loosely on the hairs, in the feathers, or in the habitat of the host. The eggs readily fall off the host onto the ground, floors, bedding, or furniture. Some fleas can lay 500 eggs over a period of several months.

Several species of fleas cause problems in South Florida. The cat flea is the most frequently found species, but dog, human, and sticktight fleas are also present. Fleas may attack a wide variety of warm blooded animals including dogs, humans, chickens, rabbits, squirrels, rats, and mice. They are most often brought into the home on pets from outside.