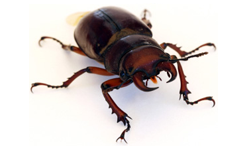 Looking for information on beetles in South Florida? You have found the right place on the web! Most Floridians are familiar with beetles, often encountering these pests in the home or on a windowsill. Beetles such as these and similar pests are often known as “pantry pests” or “stored-product pests” since they infest these areas and feed on the foods commonly stored in these locations.

The Red Flour beetle and the Confused Flour beetle are two beetles that frequent the same environments, usually pantries or cabinets where dry foods are stored. The Confused flour beetle, so named due to its similarity to the Red flour beetle, is the most abundant and harmful pest in U.S. flour mills. They feed on grains, cereal, dry pet foods and other dry foods, and can contaminate these items, especially in large numbers. They can get into packages in processing plants where they are brought into homes, breeding in the foods they infest and enlarging their populations in the areas in which these items are stored.

Nearly every stored dry food is susceptible to pantry pest infestation especially those bought in bulk and stored for long periods, foods stored in damaged containers, or those that are not kept in tight-fitting containers. Some, like the Drugstore beetle, feed on prescription drugs, laxative teas, etc., as well as dry foods. They are responsible for economic losses brought by the damage caused by feeding on post-harvest and stored grains and seeds, packaged food products, and animal and plant-derived items and products. Food that has been infested has a foul smell and taste and cannot be sold, which also causes loss of revenue.

Aside from grains, nuts, cereals, pastas, and myriad stored dry products, beetles can also feed and survive on food and other items of no nutritional content, such as book bindings; Drugstore beetles have even been known to chew through tin or aluminum foil and lead sheets. They also cause irreparable damage to valuable museum exhibits and artifacts, feeding on glue or paste, furniture stuffing, and paper they contain. Some beetle species have also been known to feed on poison found in insect rodent traps without harm.

Other industries are affected as well. Although known primarily as stored-food pests that feeding on common pantry items, Cigarette beetles are known to infest dried tobacco and tobacco products, hence their name. Sawtoothed Grain beetles feed on a wide array of dry foods and are capable of chewing through unopened paper or cardboard boxes, cellophane, plastic, and foil wrapped packages to gain access to food. Sawtoothed grain beetles cannot fly but have running legs that are used to scurry out of sight when disturbed.

Beetles are usually found when they leave the infested sight and wander around the house. The appearance of these insects on walls, counters, windowsills and in cupboards is usually a sign that an infestation has occurred. Most pantry pests are strong fliers as well. Proper sanitation is crucial in controlling these pests, as they have the amazing ability to find the tiniest food particle and also live off of it. Stored dry foods should not be kept for long periods of time, and any spills should be thoroughly cleaned. Damaged packages should be discarded immediately in tight-fitting garbage containers.