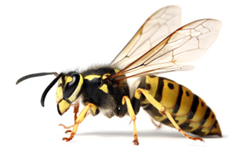 Looking for information on bees in South Florida? You have found the right place on the web! Stinging South Florida bugs such as bees can not only be very irritating, but also very dangerous to those who are allergic to them.

Honey bees can produce a painful sting and usually do so in defense or if one of their nests has been disturbed. Unlike wasps, hornets, or the increasingly problematic Africanized Honey bee,honey bees are not easily provoked.

Bees will die after they sting, leaving their stinger and venom sacs attached, which continue to release venom until the sac is emptied or the stinger is removed.

A beehive functions as a miniature society; they contain three specialized groups or castes. The castes consist of workers, drones and queens, and each has their own specialized function. There is only one queen per hive, which is the largest bee, and her main function is laying eggs. A hive may contain as many as 40,000 worker bees, which are all sterile females, and tend to be the smallest. The males, or drones, can number up to 2,000, and make up the remainder of the hive.

The queen lays her eggs in a cell in a wax honeycomb, produced and shaped by the workers, which hatch into larvae. The worker bees feed pollen and honey to the newborn larva, which undergo several moltings before spinning a cocoon within the cell and pupating. After 16-24 days a full-grown bee emerges from the cell.

Besides nurturing and feeding the larvae, young worker bees also make wax, build the honeycomb, and clean and guard the hive. They also collect the nectar and pollen, which they store in “pollen baskets”, or corbicula, that grow on their hind legs for this purpose. After this, they begin building comb cells. They progress to other within-colony tasks as they become older, such as receiving nectar and pollen from foragers. Eventually a worker will leave the hive and typically spend the remainder of its life as a forager. Workers tend to have short life spans, usually several weeks, but a queen can live for several years.

Most bee species have historically been cultivated for honey and beeswax by humans; of the two species that have been domesticated, the honey bes has been used for its natural resources since the time of the building of the Egyptian pyramids. Worker bees cooperate to find food and incorporate a pattern of ‘dancing’ (known as the bee dance or waggle dance) to communicate with each other; this dance varies from species to species, but all living species of this unique South Florida bug exhibit some form of this behavior.

Honeybees are primarily floral visitors, and pollinate a large variety of plants. Bees are basically the most important pollinators of native plants in South Florida. Other insects such as butterflies, moths, beetles, as well as birds, contribute to plant pollination as well, ensuring the reproductive success of native plants. Of all the honey bee species, the aforementioned Apis mellifera has been used extensively for commercial pollination of crops and other plants; the value of these pollination services is commonly measured in the billions of dollars.