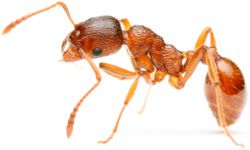 Looking for information on ants in South Florida? You have found the right place on the web! Ants are amazing creatures, but they can be real pests! There are about 20,000 different species of ants known on Earth, and they can be found in almost every environment; especially in hot and humid South Florida.

These pests range from the tiny, essentially harmless Ghost ant (also commonly referred to as the “sugar ant”) to the ferocious and prolific Fire ant that deliver a bite that literally feels like you’ve touched fire. Ant mounds can damage lawns and landscaping and contaminate food, food preparation areas, and invade pet food bowls when they make their way into your home or business. They may be small, but they make up for their size in numbers; if you spot one ant, be certain there are many, many ants; long trails of ants busily moving back and forth around the food site and the surrounding areas. Their small size makes them very difficult to keep outside as they are constantly foraging for food.

Ants have a three-part segmented body, three pairs of legs, and live in a colony with many other individuals of the same species. Ants, along with bees and wasps, are members of the order Hymenoptera. All ants are in the family Formicidae, which is divided into a dozen or so subfamilies.

Winged ant reproductives, called alates or swarmers, leave the nest in large numbers in warm weather to mate and establish new colonies. They are often mistaken for termites that are similar in appearance and also exhibit this behavior. The way to tell them apart is by appearance, since the ant’s body is thin and constricted, whereas the termites body is straight-sided. Ants also have two pairs of long narrow wings that are firmly attached; the termite wings, which are similar in appearance, break off easily. If termite swarmers have been crawling, their broken wings litter the swarm area (which is also a good indicator of termite infestation, especially if found indoors). Ants have elbowed antennae, while termites have straight, beaded antennae.

Food preferences vary among ant species, but almost all ants are attracted to sweets. Honeydew, the sweet excretion of aphids and scale is highly favored by many ant species. Some, such as Argentine, Ghost, and White-footed ants actually tend or “farm” these insects, protecting them on the plant they eat and driving off any predators or parasites in order to secure a constant honeydew supply. This also increases damage from these pests.

Ants are social insects. They live in colonies that may include thousands or even millions of individuals. The wingless worker ants are the most common adults seen. However, there are three types of adults: Queens, Males, and Workers.

Ever wonder how ants communicate? Pheromones are the best-known form of communication for ants. Ants use these chemical signals to communicate how to find food and to alarm the colony if a threat exists.

Ants grow up in just a few days. Each ant passes through four distinct growing stages: egg, larva, pupa, and the adult. Ants live a very busy, but short life compared to humans. The average life expectancy of an ant is 45-60 days. However, they reproduce so quickly that the overall colony just gets larger with time.